App development is indispensable for every enterprise. Today at least Android and iOS have to be supported. And, also don’t forget the web - a lot of people like to access a service through the web browser. This created a market for tool makers to simplify the cross platform development. This blog will examine some tools and concepts. 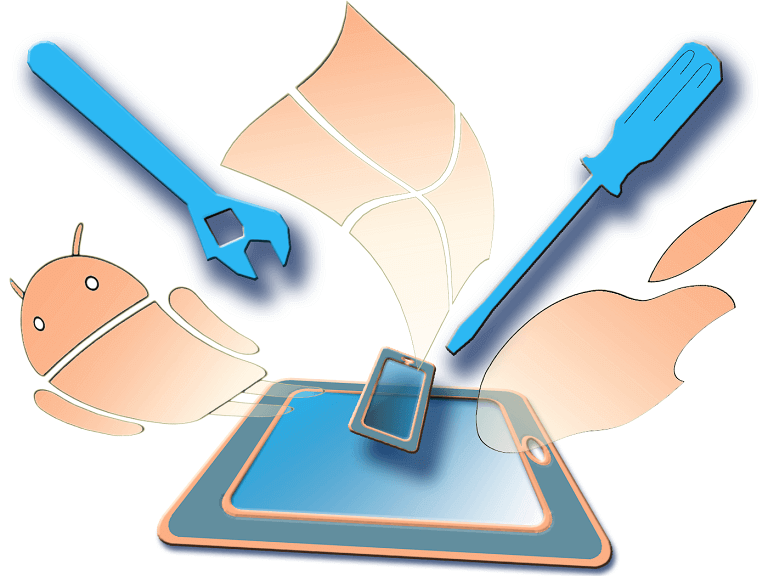 The heterogeneous environments, cost pressure, maintenance problems and lack of manpower together with a wide range of skills created a market for cross platform development tools. [Along with the user interface development which is the topic of this blog, there is also the need to define a backend strategy which can support and facilitate the app developement. Web Services (APIs) and Cloud Services are part of this strategy.]

Tools and concepts for developing apps

In my opinion, these are actually the most popular tools/concepts (of course there exist more):

The following chart tries to position the resulting apps developed with the mentioned tools or concepts regarding quality and software development productivity, if several platforms have to be supported. Nevertheless, in the end the positioning depends on one’s programming skills and how familiar somebody is with the tool he/she uses. 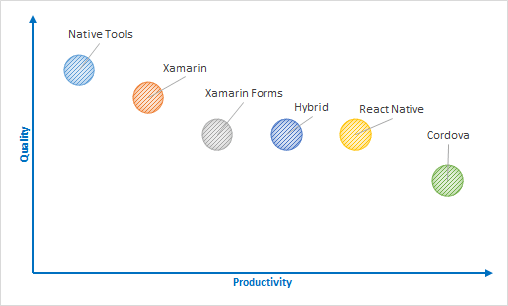 (An additional note is needed for React Native: the positioning of React Native is at the moment only an assumption after doing some first trials. The tool gets actually a lot of attention and the concept is very promising, so it cannot be left out).

An enterprise with enough budget and staff looking for the maximum result and independence from third party libraries still decides to develop with the native tools. Security issues might also play an important role. Mostly, for each platform an own development team is needed. It is obvious that this is a very expensive approach under every aspect.

With the help of Mono, an implementation of the .NET runtime which is bundled with the app, all native APIs (iOS/Android) are mapped in order to be used with C#. The bundling of Mono with the app is also the reason why the size of a Xamarin app is bigger than an app developed with the native tools. See this link explanations. App size is somehow an issue - in my opinion apps should be as small as possible. But still the app size can be accepted. Compared to the development with the native tools, only one programming language has to be learned. Theoretically everything that is possible to do with Objective-C/Swift or Java can be done with C#. But the extensive learning of the various APIs and the operating system concepts cannot be avoided. Xamarin started with a “learn once - develop anywhere” approach. With the introduction of Xamarin Forms, a layer on top of Xamarin was added. In theory this allows the “develop once - run everywhere” approach. In practice Xamarin Forms still needs specific code for each operating system. Xamarin Forms will evolve, and in the future a single code base might be realistic. The quality of Xamarin apps is high because they are fully native. There is also to remark positively that Xamarin is well established in the market and continuity is guaranteed (a problem of continuously changing web frameworks).

Hybrid Apps are a combination of native code and web code. The general idea is to use a native frame - header, footer, tabs, menus and page transition are all done with native code. The content of a page will be web technology - each page has an own WebView. This concept still needs skills of the native tools. Additionally multiple projects have to be maintained. For the browser, hybrid apps offer great synergies because mainly “only” a new frame has to be developed.

Actually Cordova apps are very popular because the productivity is extremely high - with a single code base multiple platforms can be supported. Cordova apps belong also to hybrid apps, but their native part is very small. Header, footer, tabs, menus and transitions of an app are all being done with web technology. Basically, Cordova wraps a WebView into a native app. Inside of the WebView a web app is being executed. The access of native APIs happens through plugins (which are native code) - plugins exist for a lot of scenarios where web technology is not applicable. A developer can use a plugin with JavaScript without knowing anything about native coding. Nevertheless it is to mention that there are some limitations - native code is smoother and some native concepts cannot be realized in a WebView. A successful Cordova app depends also very much on the UI (User Interface) framework. In order to come close to native, the UI framework has to rebuild native components as close as possible - in my opinion there is potential for improving. But already today it is possible to program Cordova apps which are difficult to distinguish from native code for the normal user. A well designed Cordova app can also be used with little modification as a web app which will be executed in the browser.

React Native from Facebook is gaining a lot of attention actually. A similar product is NativeScript from Telerik. In my opinion the products are not really ready yet, but the concept they are using is very promising - for this reason they have to be mentioned in this early stage. React Native and NativeScript use the JavaScript engine from the operating system to map web code to native code. Theoretically all APIs of an operating system could be mapped by the developer himself. The big productive gain comes where React components can be used. At the moment there are only a few components available but this amount will grow fast. React Native addresses Web Developers (but maybe not only) who want to develop apps with native APIs with their web skills. At the moment, React focuses on “learn once - develop anywhere” approach. But in the future there might be a layer on top where a “develop once - run everywhere” approach will be possible - NativeScript is already going in this direction, and they introduced lately NativeScript Plugins which are similar to React Components but target multiple platforms. With React it is also possible to build for the web by using the same development skills and maybe to reuse some components.

When it comes to decide which tools should be used, there are always several external factors which have to be taken under consideration like budget, staff, existing apps and IT organization.

From a quality point of view an approach which uses native APIs leads to a better result. The native development tools are still the tools of choice if it comes to reach the best possible user experience and being independent from third party libraries.

Xamarin is very interesting in cases where already a lot of C# .NET knowledge is available, and by the time Xamarin Forms evolves further.

A combination of native code and web code (hybrid apps) might also be very interesting; it provides a lot of synergies if the browser shall be supported as well - high quality apps can be created. As a disadvantage I consider that native and web knowledge are required. Compared to a Cordova app significantly more development effort is needed.

From a productive point of view Cordova is unbeatable at the moment. If additionally the browser shall be supported, the productive gain is even higher. Especially for enterprise developments these are very strong arguments!